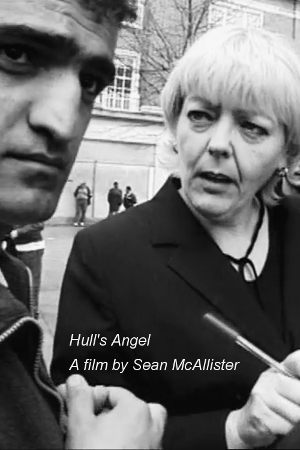 Films about asylum-seekers involve us looking at the world through their eyes, and in doing so, we’re granted a unique perspective. Alert to the possibilities of being conned and exploited, and the need to get ahead at all times, the asylum-seeker is all eyes and ears, forced to be attentive to the shifting landscapes he traverses. Like the children in Iranian films, whose unique perspective on society he shares (both are margin-walkers – between innocent youth and canny adulthood, and between reviled foreign-ness and belated acceptance), he is alive to newness, possibility, awe.

The clash between new and old versions of Englishness lies at the heart of Hull’s Angel, recently screened at the Sheffield International Documentary Festival and soon to be broadcast on Channel 4. It’s a portrait of a remarkable 48-year-old woman called Tina, droll and resilient and passionate, who volunteered to help the 1,500 Iraqi Kurds relocated to a run-down part of Hull in September 2000.

They were met with indifference at best, more often unstinting hostility. Tina says: “Saddam kills you instantly, and England kills you extremely slowly and painfully.” Local youths, living in a town where few fishing-port jobs exist, take out their frustration on the newcomers. After Tina’s daughter Nicola marries one of the refugees, she is treated as a collaborator.

Tina herself becomes a “mother” figure for the less than saintly Iraqis. She creates a family for them, and helps them to find work. The only jobs available are for unskilled labour at de-unionised factories that pay less than the minimum wage. Tina doesn’t want to send the refugees there, but they have no other options. After losing her own job, nor does she: we see her forced to work shifts at a chicken slaughter factory.

Hull’s Angel is aptly titled. It is both funny and moving, as you would expect from a director who has previously made documentaries for BBC2’s sorely missed Modern Times strand. It starts out beady-eyed and objective, but ends up with McAllister trying to help his subject, in much the same dynamic of intervention and attraction that drew Tina to the refugees. By the close, Tina has grown weary of the abuse and ingratitude she has to face from locals and refugees alike, and reluctantly leaves for Bradford. “Like the asylum seekers, we’ve copped out and left,” she says.

“Sean McAllister’s Hull’s Angel saw him return to his home city to examine the impact of an influx of 1,500 asylum seekers.

After the screening, McAllister said: “When I arrived in Hull the asylum seekers told me about this local lady who did not even have a home herself but was helping them… basically they said never mind us, you should do a film on her.”

So McAllister found Tina, a 48-year-old former housewife who was in a relationship with a 24-year-old Iraqi. The man shows McAllister where a bullet has gone through his shoulder during a clash with Saddam’s regime.

The film follows Tina for a year as she loses her job, is shunned by her family, and is spat on and punched in the streets for helping the mostly Kurdish refugees. All this as she wonders whether her boyfriend, who is already married, just wants a passport out of her. He sends his money to his wife in Iraq while Tina takes a job slaughtering chickens. “I looked more like Hull’s slapper,” Tina joked after the screening. But the depth of her humanity is overwhelming.”

When I started thinking about this piece, I was originally just going to write about the evening out I had on Saturday (July 19th). I and others around me experienced the cultural diversity that Hull has to offer. A Zulu wedding, a Salsa Night in aid of Deaf Children, Déjà Vu at The Welly, my diverse bunch of mates My banging night out! However on Tuesday (July 22nd) night I watched ‘Hull’s Angel’, a documentary made by Hull people about Hull people. It was the story of a woman from Hull who gave her time freely and willingly to help the recent additions to our ever-changing melting-pot of a city. Following her, and her daughter, (who I knew through my own work with this cities huddled masses, and political activism in Hull). We got a not altogether positive image of Hull from this piece of documentary film-making. In fact with scenes of ‘Little Beirut’ being a major focus of the film, it didn’t look good for us here in Hull at all. The almost slum like squalor that the disparate remaining residents of that small enclave between Anlaby Road and Hessle Road, somewhere!

I sat and watched the documentary with my friends and family in stunned silence! Why? Because we suddenly realised we all live in a city trapped in a time-warp, resistant to the kind of changes that happened across the country’s inner-cities generations ago. We are a multi-cultural country, simple as. Probably one of the most concentrated mixes of differing cultures from all over the world in this geographically tiny country, but with a big personality. We are the mongrel breed! Heinz 57, as they say, and proud of it. That is what makes Britain great, our diversity, and ability to handle change. We have a long history of being invaded, and the recent influx of refugees and asylum seekers is hardly an invasion party. Up until a few years ago, Hull was known as a ‘White City’, because that was the majority of the faces you’d see on the streets of Hull. Local born white working-class, that was the credentials of the majority of the city’s residents once upon a time. But times they are a changin‘, now no-one is quite sure what it means to be from Hull. What is it that makes you want to describe yourself as an ‘ully! It appears we must broaden our definition of what we regard as a fellow citizen in this city. As if we are to start excluding our most recently arrived residents, then surely we must also exclude other immigrants into the city who were not Hull born.

What do I tell my friends? Many of whom have lived here years, and can be found to slip into Hull-isms like naturals from time-to-time. They feel they are 100% Hull and proud, carrying the banner for Hull wherever they go. Do I now tell them they are all sadly mistaken, or in fact delusional, to think that they could ever proclaim themselves to be from Hull. A right only bestowed on those born within the sound of howling fishwives, and the smell of the Cocoa Mills. Yeah right! I can see them falling for that one. They’d tell me where I could stick that
idea! And to some extent that is what would define them as being an adopted ‘ully! It’s an attitude, a way of seeing the world around us, and having a strong opinion about it. Everyone who is from Hull, or has claimed sanctuary here over the years have one element in common. Despite the ever growing diversity of this city, there is I feel a common trait that defines what is to be from Hull. We all have an opinion about the place good or bad Usually bad! However that is our right as citizens of Hull. We have a right to slag the place off, but woe betide anyone from outside who comes in and starts whinging about the place. As then they will meet the acid-tongue of an ‘ully on the defensive.