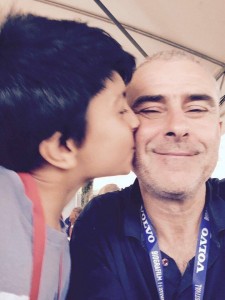 With A Syrian Love Story nominated for Outstanding Debut at the 2016 BAFTAS for himself as director/producer and Elum Shakerifar as producer, for Best Documentary at the European Film Awards, and for Best Documentary at the Berlin Peace Awards, plus having won the Grand Jury Prize at Sheffield International Documentary Film Festival 2015, Sean McAllister is once again getting the recognition he deserves as one of the finest documentary filmmakers the world has ever seen.

I first met Sean a decade ago in the bar of the Novotel hotel in Sheffield during Sheff Doc/Fest where he was showing The Liberace of Baghdad shortly before winning the Sundance award for Best World Documentary 2005. I knew I was in the presence of a singular person, not only is his filmmaking honest, raw, probing and revelatory, but as a person (as anyone who has met him will testify) he is one of life’s characters, someone who once met you will never forget.

With The Guardian giving A Syrian Love Story a five star rating and its film critic Peter Bradshaw hailing the film as the third best feature film of 2015 as well as winning Sheffield Doc/Fest’s Grand Jury Prize, A Syrian Love Story is shaping up to be McAllister’s most successful documentary yet.

I remember Sean visiting Syria time and time again before the war broke out, falling in love with the country and spending five years finding and then filming what was to become A Syrian Love Story. Ahead of his time as always, Sean instinctively knew that something was brewing out there, and he was determined to be around to see what would happen when the pot boiled over. On an undercover assignment for Channel 4 news, he was arrested and imprisoned by the Syrian secret services, where he spent five days in jail, often being forced to hear the cries of prisoners being tortured around him.

Sean escaped unscathed and here, a fortnight before the BAFTAs, Sean talks about making A Syrian Love Story and touring the world showing it to constantly packed out cinemas.

True, although Nick Fraser to his credit did eventually commission a film about Syria. It was a great story about a gay restaurant owner I’d met near Homs, but when I went to film him he got scared and pulled out. By which time the BBC money was in the bank and I was too broke to tell them the truth. The great thing about Nick and why he is unique in this business is that he takes the same risks as we filmmakers take and then he leaves you alone. So I spent the next three months looking for another story. I met Amer and started filming but there seemed no chance of getting Ragda out of prison. At the same time two different people who didn’t know each other told me of this man they’d met who was a great “Sean character” – problem was he wasn’t in Syria, he was in Yemen!

The Arab Spring had started but it seemed impossible to go to Syria. I’d left the UK for three weeks and came home after four months for Christmas with no film. My eternally supportive wife Ruth wasn’t happy! So over Christmas I got in touch with Kais and as a tour guide he managed to get me a visa to Yemen. After Christmas I followed my gut instinct and went there. Everyone else was going to Libya. I made The Reluctant Revolutionary without telling Nick Fraser – then whilst still in Yemen I heard that protests had broken out in Syria and Amer and his 14 year old son Kaka had been arrested held for a day. I flew home, handed my rushes to the editor and flew straight to Damascus on a tourist visa. No camera. I bought one in the Sony shop there. I continued filming the Amer film (which was to become A Syrian Love Story) while editing the Yemen film (The Reluctant Revolutionary.)

I remember Nick saying in the edit suite, “I usually have to ask how your story has changed, but on this occasion I have to ask, “Where in the world are we?”” I told him Yemen and he told me to play the movie. And he loved it. He has since said he loves commissioning me because he enjoys the surprise of what he’s going to get.

What are the most important things you’ve learnt whilst touring with the film all over the world?

I’ve learnt that people really care about this refugee crisis and when given something deep and meaningful to engage people do go and support such films. It’s been amazing

The family love the film’s success. For so long they felt as if the film was never going to be seen anywhere. Now Amer is with me whenever possible. Ragda, less so, although she was with me for a couple of days in Istanbul and loved it.

What effect has the film had on their lives?

Clearly the kids (Bob and Kaka) have new lives in France now. Without the film they wouldn’t be there. Many of their friends are dead, others are stuck in refugee camps around the world. On another level Amer and Ragda lost each other but the film has brought them back together as comrades to talk to audiences around the world about the issues close to their heart.

What effect has the demands of promoting the film had on your own life?

Having three teenage kids myself, being away from home is a constant struggle. One of the hardest things for me in making the film and films generally is the time away from my own kids. I think they pay a price. Especially my eldest son, George, who recently left home at the tender age of 17, for which I feel a bit responsible. But we are talking now and I hope he will come home again. Anyway I was so proud to see his lead role in The Devils doing a full-on Ollie Reed role and magnificent performance. It was West End quality never mind Brit school. I was so proud of him, wonderful stuff.

Negotiating my family situation is always hard but also touring is rigorous in other ways, for example keeping fresh with a different audience night after night, all who ask similar questions, but I love meeting people and seeing their different reactions. Like tonight it plays in Jerusalem and tomorrow in Ramallah where I’ve just had the most wonderful Palestinian breakfast although it’s winter now and freezing cold…

Yes, and since trying your husband Brian’s wonderful home made vegan cheese I’ve been making vegan cheese myself, and am keen to go vegan. Enjoying your Nirvanosh vegan recipe blog by the way and spreading the word!

Very demanding and we were learning as we went. But distribution is Elhum’s passion. She produced the film with me and is great at distribution. She steered it all masterfully although it meant many sleepless nights. I think the BFI are very impressed with the results. Especially for awards like BAFTA where you need to get DVDs to 6000 members – only big films with big distribution can afford the 20k it costs – we could only send links and do screenings wherever possible to get BAFTA members along. But we did it in the end.

What ended up happening with distribution? Did you eventually get mainstream distribution and how?

No we didn’t get picked up by anyone. They saw it as an uphill struggle, and it is, but we made it work by attending the films with Q&As and holding targeted screenings aimed at specific audiences, not trying to go on general release nationally and compete with mainstream movies.

How has being imprisoned in Syria and hearing other people being tortured affected you since?

I think of it from time to time. I don’t like enclosed spaces anymore and even found IMAX Star Wars in 3D too claustrophobic. I don’t like noisy atmospheres I feel I can’t escape from either. Or maybe Star Wars was just a pointless crap movie, I dunno. I think these things have a subliminal effect on us and affect us from time to time when we’re least expecting it…

What are your feelings generally about Syria now?

I’m generally sad for Syria that our inaction has deepened the problem there, not made it any easier for us to solve but harder. Standing by and allowing Bashar to butcher his people ignoring the barrel bombing of them every day by his forces and instead only showing what Isis are doing there. We now need to find a way to make safety zones inside Syria to protect the people and stop them having to flee.

How are your plans going to make a documentary about your hometown of Hull?

I’m moving more into that head space. I’d been resisting it I think but I can see the money is there and the appetite for BFI BBC co-produced film for cinema is the intention to be delivered sometime in the 2017 year of city of culture activities. Not sure what or who it will be about though. But I guess another story of love and hate, but from Hull this time!

What’s the stupidest question you’ve been asked during a Q&A?

I did a screening in the Jewish centre in north London. A little old lady disarmed me with the first question there asking how the subjects can afford computers and mobile phones if they are supposed to be refugees. I made a mistake in the way I responded.  I got angry and refused to answer her but an Israeli insisted I answer. It was just insulting to me. But I don’t think she meant it to be. I then brought Amer up on Skype and they asked him why he left his homeland in the first place. He laughed and answered because some people came and stole his land when he was 3 and since then he has been a refugee all his life. He got them back for me. I stormed out wishing I’d never shown the film there at all.

What’s the funniest thing that’s happened whilst touring the film?

I remember Amer’s face when we’d lost the car after a night’s drinking in York after the screening there and he was just jaw-dropped looking at girls littering the streets, drunk, shouting and vomiting. He’d never seen anything like it and to him it seemed like another kind of war zone. Then waking up next to him as I’ve done on so many occasions in the 5 years making the film and seeing him asleep next to me in the car in a York car park – it was funny that the guy I used to wake up next to in Tartous all those years before was now in my homeland with me sleeping rough as we’d always done. Nothing had changed!