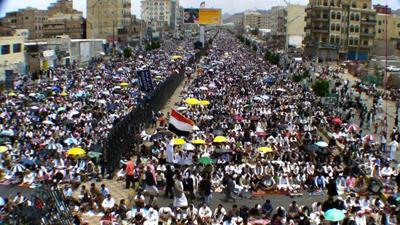 Sean McAllister makes films about ordinary people in extraordinary situations. He has made films all over the Arab world; films that place the domestic next to the political, and that – without wanting to sound too much like the Dalai Lama – remind us of our shared experience.

His latest, made with the BBC, is The Reluctant Revolutionary. Its main character is Kais, a 35-year old Yemeni father and tour guide down on his luck in a country on the brink of change. It follows Kais from his initial disinterest in the revolutionary movement in Yemen to his embracing of it. As well as telling the story of a man trying to get back on his feet, it is the story of a country caught up in the Arab Spring. This comes to a head in the last quarter of the film, which documents a massacre in “Change Square” in the capital, Sana’a.

As foreign journalists were tracked down and removed from the country, Sean, posing as a tourist, stayed and filmed. The result is a documentary that shows the roots of the ordinary people’s discontent with the regime of former president Ali Abdullah Saleh while staying well clear of “tough Western guy in a dangerous place” territory.

I spoke to Sean about it.

OSCAR: Hey Sean. In the film, your main character is a tour guide and former hotel owner. How did you find him?

SEAN: It takes ages to find good characters. I was looking to do a film in Syria for a year and a half, before the revolutions began in the Middle East, and in the course of looking a couple of friends in Syria told me about Kais. When I found him, he no longer owned a hotel, which is what I had intended to make the film about – a “quirky” film about tourism in this dangerous part of the world. Revolution was beginning to take hold in the country though, so the circumstances turned out to be even more interesting.

OSCAR: So your initial intention had been to make a film about tourism in Yemen?

SEAN: Well, what I try to do when making films outside of England is find a character that a general audience can connect to. My target audience is usually my mates back up in Hull, who don’t really give a fuck about anything except what’s happening around their neighbourhood. They’re pretty representative of every neighbourhood in the world, in that respect. It’s quite difficult to get ordinary people to look at international issues. ‘Newsnight’ blurts it out every night, CNN regurgitates the same old shit every day and they assume everyone’s really gripped and on the edge of their seats, but most people don’t really know what the fuck’s going on.

OSCAR: I guess that’s true. Your films look at these large political situations through the eyes of one character, normally. Is that for people who can’t relate to the Newsnight-style of storytelling?

SEAN: Yeah, I made a film in Palestine a few years back which was about a guy who had drinking problems and whose wife was leaving him and you know, all my mates, they all had drinking problems and their wives were always leaving them. So immediately they can step into a Palestinian’s life without the politics being at the forefront. Suddenly, he’s an ordinary guy to them and then through those initial connections they latch on to a political understanding.

OSCAR: I suppose the tag would be “ordinary people in extraordinary circumstances”.

SEAN: I think so. When I was at film school we had this test, that basically asked us to find the extraordinary within the ordinary. That’s the challenge with documentaries and that’s the difference between documentaries and news.

OSCAR: You and Kais have this natural rapport, which runs through the film. Does that get in the way of the story or is that the story?

SEAN: In television land they call characters “contributors”, not “friends” and they even have this awful thing of telling you not to get too close to the people you film. I’m the opposite. When I’m looking for a character I’m looking for someone I can befriend. I’m looking for someone who will step into the process of this filmmaking and change as a person by embracing it so it becomes part of the story. I found Kais and I thought: wonderful, I’ve got the character, I’ve got the revolution. Number one problem: He’s fucking against the revolution! I’ve got the revolution but this motherfucker wants to stay at home all day. Fortunately, my approach is not fly on the wall, it’s fly in the soup. I want to get in there and change things. I’m filming people but I’m also telling people to snap out of it. I want to show the audience that I’m fucking around with reality. I want to see what will happen.

OSCAR: There’s this nice bit where Kais tells you that what you are doing is important and that your eye is the witness to these events. Yemen has dropped in and out of the Western media cycle and it is hard to see where it fits at the moment.

SEAN: Unfortunately, as the news escalates, the more people die. Even the massacre I filmed was relatively small. It was an average day in Homs. It just so happened that my camera was there. People in Yemen felt the news was being missed because Japan was taking centre stage with the tsunami.

OSCAR: Do you think that what was happening in Yemen was influenced by the Arab Spring?

SEAN: Oh absolutely, yeah. I was filming in Syria before and after and there you could see the way real oppression works. In Yemen, the process of democracy had begun under Saleh, which meant that they tolerated this peace camp outside the university, whereas in Damascus, they didn’t. In Yemen, two students saw what was going on in Tunisia and Egypt and started the peace camp that grew day by day. It felt like I was re-living the kind of thing that happened to Russia. You’re on the crest of the wave and to be honest you don’t really know if it’s right or wrong but you can’t fucking stop it. People running into bullets and not giving a shit… There’s a fearlessness that starts to emerge in people and a readiness to die.

OSCAR: The way the film builds up shows that. It’s very moving at the end, when you find the kid who was going to die in the hospital…

SEAN: The BBC took that out. They wanted me to blob him and I said it’s more insulting to blob his face, I’d rather just remove him. It’s really stupid. I just thought: “Who are these suits making decisions on the part of the Great British public?” They also wanted to get rid of the guy who makes a victory sign as he’s dying and I wouldn’t let them… I just asked them: “Who is making this moral judgement about what is acceptable? I was there. I put my life at risk to film this massacre, so I think I’m the best judge as to what people should see.” They asked me to get permission from the boy’s parents and I told them they would be very happy for him to be on camera because he died for the revolution. I told them that if they blobbed his face it would be an insult to the parents.

OSCAR: As for the tourism aspect of the film, that is forgotten about in places like Yemen, Syria and Pakistan. Do you see a tourism revival happening in Yemen any time soon?

SEAN: No, but maybe a bit quicker than in Syria where tourism was enormous – I think $15 billion a year… I was blown away by Yemen. Everything in Yemen was far more interesting than in Syria. Syria is quite immediate and interesting and it’s good for fat Americans because Damascus looks a bit like Jerusalem and you can have a beer in a modern bar. But if you go to Sana’a it’s like going back 100 years; You kind of freak out. You want to be wearing a big dagger! Yemen is still largely unexplored though and can still be marketed when things get better.