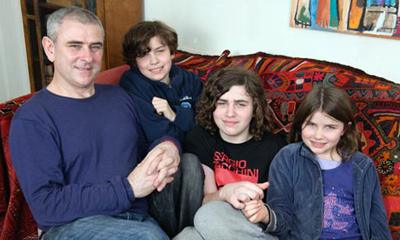 Sean McAllister is a filmmaker with three children – he often faces danger in conflict zones and is sometimes away for months. How does it affect his family?

Last autumn, Sean McAllister was snatched by the Syrian secret police, in possession of a lethal piece of equipment. A 46-year-old independent filmmaker who tends to attract the adjective “maverick”, Sean was using a high-definition camera hidden in a pair of sunglasses to covertly document the growing rebellion in Syria. The authorities were convinced that he was a spy.

He was detained with political prisoners who were blindfolded, beaten and crammed into cells so crowded that they could not lie down to sleep.

Sean would be the first to admit he is not a gung-ho war correspondent but he has a knack of finding stories in countries that are promptly convulsed by violent revolution. And he certainly oozes the kind of black humour and single-minded zeal that characterises those journalists who make considerable personal sacrifices to give voice to people caught up in conflict.

The problem, however, is that the family of the daring chronicler of war must make a sacrifice too – whether they like it or not. Marie Colvin, the Sunday Times reporter who was recently killed in Syria, had no children but many war correspondents do, and when Sean was imprisoned in Syria, at home in south London his partner, Ruth, and three children, George, 13, Harry, 11, and Katie, nine, had no idea what had happened to him.

“I don’t go searching for danger,” Sean says. He is sanguine about being captured in Syria and claims he did not fear for his life. “I was in the wrong place at the wrong time with somebody who was deemed suspicious – it’s a gamble hanging around in Syria filming undercover. Eventually they get you.”

Held in the secret police office, rather than being dumped with the Syrian political prisoners in the cells below, he befriended a couple of guards by discussing Shakespeare with them into the night.

As well as his documentary, Sean was also on an assignment for Channel 4, which, with the Foreign Office, made strenuous efforts behind the scenes to secure his release. The Foreign Office kept Ruth, a mental health social worker, closely informed. The children weren’t told at first. When they were, their first reaction was to giggle and say, “Daddy’s in prison – that’s kind of cool.”

Moments later, as the implications sunk in, his daughter began to cry.

Sean grew up in Hull with six sisters, left school at 16 and worked in a factory for two years before leaving. After a decade on the dole, he made his first film about working-class life in his home city. Since then, he has tried to alternate between making films abroad and in Britain. So he has travelled to make films in Iraq, Japan, Syria and Yemen.

The Syrian film he was making is still uncommissioned but a different project set in Yemen, The Reluctant Revolutionary, which documents the Arab spring through the eyes of a tour guide will be shown on BBC4 on Monday 19 March.

While he is not compelled to go to the frontline like Colvin and other war correspondents, he often spends longer in conflict zones than many war reporters, who tend to undertake shorter trips. In the last few years, he has made 10 trips to Syria and three or four excursions to Yemen. At least military families know when their loved ones are returning from a tour. For Sean, a three-week trip to Yemen lasted three months. It makes goodbyes very difficult, he admits. Even so, his family seem remarkably accepting.

“I’ve not got to the point where my partner is saying, ‘Don’t ever go there again,'” he says. His parents, both in their late 80s, are “quite laidback”. The sternest criticism comes from his six sisters. “They are always on at me. One sister is constantly sending me hate mail about going away. She says, ‘You’re not thinking of your family or your parents.’ Everybody would like me to stop. Maybe I should start listening to them.”

Does he justify his absences with an I-must-provide-for-you argument or an idealistic appeal about stories that must be told? Sean gives a hollow laugh. “I wish I was bringing money in and supporting my household – that’s the dream.”

His kind of filmmaking is far from lucrative. Driven by the stories he tells, he admits he is deeply reluctant to leave a country until he has found a beginning, middle and end. Has he put the story before his family? “They would say I have always done that,” he says. “I think it’s highly selfish of me. It’s something I struggle with all the time. Good family people should be at home with the kids. I’m pursuing something very self-centred and selfish. It’s a single man’s job this, isn’t it? It’s not a family man’s job, and that’s the thing I struggle with.”

War correspondents often have few family ties – like Colvin, Kate Adie, for example, has no children – but the women who leave their children at home while they place themselves in harm’s way, such as Sky’s Alex Crawford, who is married with four children, often face thinly veiled criticism. Sean thinks many of the best documentary-makers are women but most leave the industry when they become parents. “It’s difficult for a man, but it’s virtually impossible to do it as a woman,” he says. “Women filmmakers who have left kids with their partners have been really looked down upon, even in our age.”

In The Reluctant Revolutionary, Sean becomes part of his story, one of a dwindling band of foreign journalists stalked by Yemeni security services. A conversation with his son, Harry, features in the film. “He was always nagging me about going to dangerous places,” says Sean. “Without saying directly that I shouldn’t be there, he was saying, ‘These people should fight for their own freedom. It’s not necessarily to do with us.’ He was clearly sending me a message.”

Sean may make light of his job but he does worry about how his absences have affected his children, particularly his eldest, George, who was five when Sean disappeared to Iraq. “I think it’s left a scar.”

Last week, Sean flew to Lebanon to meet the Syrian subjects of his ongoing Syrian film and missed George’s interview for a new school. “I really wanted to be there,” he says. “You try to make up for it in certain ways. It’s stupid but you do – by spending money on them or buying them lots of sweets. From experience, it hasn’t really worked.”