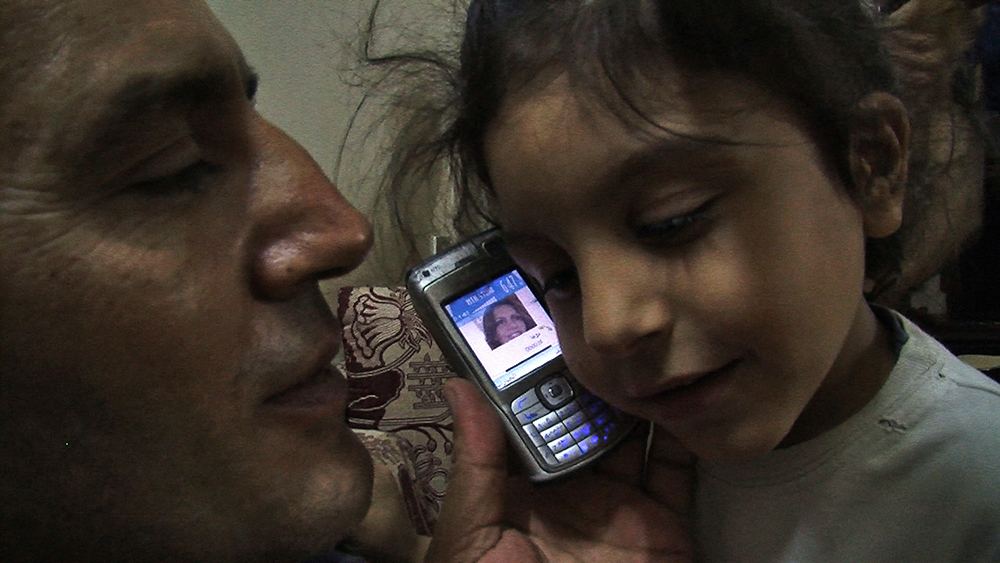 Filmed over 5 years, A Syrian Love Story charts an incredible odyssey to political freedom in the West. For Raghda and Amer, it is a journey of hope, dreams and despair: for the revolution, their homeland and each other.

Amer, 45, met Raghda, 40, in a Syrian prison cell 15 years ago. He first saw her bloodied face after a beating when she was placed in a neighboring cell. Over months they communicated through a tiny hole they’d secretly made in the wall. They fell in love and when released got married and started a family together.

This film tells the poignant story of their family torn apart by the tyrannical Assad dictatorship. Filming began in Syria in 2009, prior to wave of revolutions and changes in the Arab world – at the time, Raghda was a political prisoner and Amer was caring for their young children alone. We filmed in the thriving heart of the Yarmouk Camp in Damascus – now an infamous news story as its inhabitants are being starved to death by the Assad regime. At 4 and 14, Bob and Kaka have already spent their whole lives watching either their father or mother go to prison for their political beliefs. Quiet, considerate and mature, Kaka tells me how he is prepared to follow his mother and father to prison for the price of freedom.

This intimate family portrait helps us to understand why people are literally dying for change in the Arab world. Yet, as Raghda is released from prison, filmmaker Sean McAllister himself is arrested for filming and the political pressure around all activists intensifies. The family flee to Lebanon, and then to France where they are given political asylum in the sleepy town of Albi, where they now watch the revolution from afar, waiting for Assad to fall.

However, in exile, Raghda’s mental heath suffers. She attempts suicide. We see their new life in France develop but the war is now between them. In finding the freedom they fought so hard for, their relationship is beginning to fall apart.

“Filmed over a period of five years, this intimate and insightful documentary perfectly balances the personal and the political, telling its tale of national and international upheavals through their impact on individuals at the cutting edge of change. This is a profoundly moving account of two love stories: that between the film’s central couple, Amer and Raghda, who are torn apart by imprisonment and exile; the other being their love for Syria, which casts a long shadow over their lives, their marriage and their children.” – © Mark Kermode, The Guardian

See a selection of reviews for A Syrian Love Story

2015 The Critics Circle; Nomination – Documentary Of The Year

2015 Sheffield Doc/Fest – Grand Jury Award… “The Jury were enamored by this Bergmanesque portrait of a relationship and love, taking place against an ever-changing and tumultuous backdrop. Delivering unusual gender portraits it explores vulnerabilities, looking at the concept of belonging, providing a unique and intimate portrait of disillusionment.“

Biografilm Festival 2015 – Special Jury Award | Special Mention… “For the courage and tenacity to tell, with a direct language and without filters, a story of love and war by bringing us in the daily life of a family distorted by idealism and violence.“

A Northern Soul / A Syrian Love Story / The Reluctant Revolutionary / Japan: A Story Of Love And Hate / The Liberace Of Baghdad / Hull’s Angel / Settlers / The Minders / Working For The Enemy