Sean McAllister returns to his hometown, Hull, as curator of its’ UK City of Culture opening. Back living with his 90-year-old parents and reflecting on changes to a city hit by cuts in public spending and divided by Brexit, Sean is drawn to the fringes of town where he encounters Steve – a struggling warehouse worker with a dream. 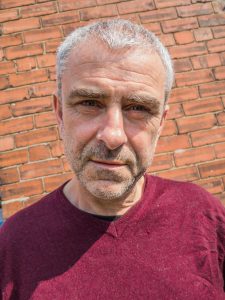 “A NORTHERN SOUL began when I returned to my hometown to be Creative Director of the opening piece for Hull UK City of Culture 2017. I was living back home with my 90-year-old parents for the first time in 20 years, observing tensions flare in a city where over 1 in 3 children are living in poverty, and one which voted 70% to leave the EU while at the same time thriving in the renewed hope of the cultural spotlight. Eager to explore this further I was drawn away from the bright lights of the blossoming city centre to the fringes of town where I met a struggling warehouse worker called Steve. He reminded me of myself 20 years ago – stuck in a dead-end factory job while harbouring creative dreams.

Steve is a warehouse worker by day, hip-hop artist by night. He represents a forgotten generation whose dreams haven’t been met. But Steve is also a deeply community-driven optimist, who has also been trying to find a way to bring creativity and culture to the disadvantaged kids of the city. Kids like he once was – kids whose opportunities to build a better life are restricted by the world around them. Music has been his dream for 30 years and he saw the opportunity in the City of Culture year to start a project: the ‘Beats Bus’, using a bus donated by his company and converted into a sound studio, allowing him to visit some of Hull’s poorest schools and give kids a voice through music training and performance – a chance he never had.

Spending time with Steve allowed me to reflect upon my own story. Born and bred in Hull, I left school at 16 and went straight into dead end factory work, eventually making a film in a pea factory that got me into film school. I have since enjoyed filming around the world – from Syria to Yemen – rarely looking back. But when my birthplace Hull won the City of Culture bid, I was asked to come ‘home’ to be Creative Director of the opening ceremony. Living with my 90-year-old parents Kath and Joe, for the first time in years through 2017, I experienced the events through their eyes. Their running commentary reminds us of the opportunities and chances they had following a life at work. Their memories of the past also bring in a different perspective on Brexit – they remember how hard it was to join in the first place, and that this poets’ city is built up of so many passing nationalities.” – Sean McAllister

“This is not a story we see enough, despite the heritage of British documentary in this space – a deeply explored character journey through poverty in which those affected tell their own stories with dignity and respect. We don’t see it enough because there aren’t many other film-makers like McAllister…” – © The Guardian

See a selection of reviews for A Northern Soul

“A great work of radical empathy” – Charlie Phillips / The Guardian

A Northern Soul / A Syrian Love Story / The Reluctant Revolutionary / Japan: A Story Of Love And Hate / The Liberace Of Baghdad / Hull’s Angel / Settlers / The Minders / Working For The Enemy